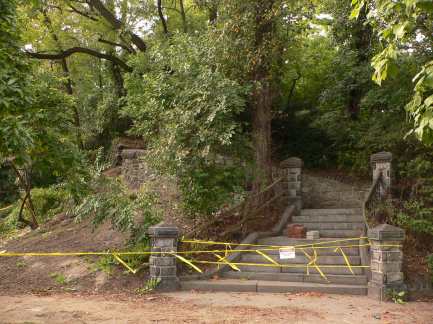 The Fairmount Park Historic Preservation Trust is currently removing nearly a century of overgrown vegetation on the south side of Lemon Hill with the intent of making visible from Kelly Drive Henry Pratt’s Georgian mansion: around which were planted the citrus fruits that gave the hill its name. 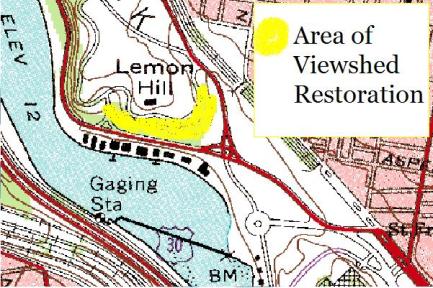 Officially, the project is termed a “viewshed” restoration; it’s an attempt to restore the look of the hill to roughly its state in the mid to late 19th century and also to allow those on the hill a clear view of the Schuylkill.  Usually, preservationists working with landscape crews use historic images to pinpoint overgrown areas and remove shrubs, small trees, and undergrowth around important cultural features.  In the Lemon Hill project, two factors prevent preservationist from restoring the hill’s landscaping to before roughly 1870.  Images of the hill prior to 1870 tend to be woodcuts, lithographs, oil paintings, and watercolors of various quality.  Most are extremely stylized and amateurish with perspective and scale fluctuating wildly.  These are helpful in a general sense and give an impression of clearings on the hill.  After 1875, thanks to commercial photographer James Cremer, the photographic record of nearly all of Fairmount Park substantially improves.  His stereoscopes of the park’s statuary, landscaping, and structures were sold widely and are an indispensible tool in recreating historic landscapes.

Perhaps unfairly, Fairmount Park has always suffered in comparison to Central Park, Prospect Park or any other Olmsted project of note.  Recently in the Pennsylvania Magazine of History and Biography, Historian Michael Lewis has tried to champion the “sophisticated” designs and designers of the Park prior to 1867 — the date Lewis contends others begin their analyses.  Lewis appears overly preoccupied with defending Sidney’s 1859 plan for Fairmount against a straw man Olmsted and his estimation of Sidney’s non-moralistic pragmatic design is mired in taste.  In reality, James Clark Sidney (and his partner Adams who, apparently had little to do with the design) were devoted to the image of fussy overcurvaceous parks found throughout A.J. Downing’s unintelligible villa design books.  They had not clearly separated the park from the city, they merely cast “serpentine” paths among the topography, and many of the park’s principal roads seem carriageways and not pedestrian paths.  (Hence, today Lemon Hill to Sedgely down to the Girard Avenue Bridge is the domain of cars and wide open spaces.)  Sidney, a cartographer, was an imitator interested more in the “tactile and useful…than the moral” according to Lewis and did not conceive of moving through a sequence of structured spaces as a kind of pacifying program.  But while Sidney lacked both creative techical vision and a well-developed philosophy of landscape architecture, the flaws of Lemon Hill are not solely rooted in design.  The Park Commission’s notorious financial deterioriation in the 20th c. has allowed overgrowth to swallow up the few interesting features of Sidney’s plan.

Take for instance, the great stone staircase at the very foot of Lemon Hill (very top).  If cleared of growth and opened, this staircase and the network of paths behind it will induce park users to cross Kelly Drive thus linking the vital Lloyd Hall-Waterworks-Boathouse Row complex to Lemon Hill.  These are original to Sidney’s plan.  Consider, too, that Sidney’s carriageways on Lemon Hill were praised by Gardener’s Monthly (1859) for “affording the most exquisite views up and down the river.”  Aside from Fall and Winter, the Schuylkill is completely occluded by the dense stands of trees that have flourished since 1859.  To allow views down the viewshed, the Trust and Commission will remove trees as they did near the future skate park along the river path.  Sidney’s design for the original Fairmount Park is clearly not in the same league as Olmsted’s flagship parks.  Perhaps the most attractive feature of the Fairmount Park System is not its classically well-landscaped rustic sections but its watershed parks (which themselves are manufactured).  However, efforts like this viewshed restoration (which I urge you to follow) will undoubtedly reveal the hidden nuances of Sidney’s plan.