Sanitarium Playground, better known in the hearts of thousands of Philadelphians and South Jerseyans as Soupy Island, appeared at the end of Red Bank Ave. with its mirth subdued by barbed wire. The compound’s shabbiness belied its significance to scores of young Philadelphians whose lives were spent in the stifling airlessness of Philadelphia’s red brick canyons. Founded in 1877 by an organization called the Sanitarium Association of Philadelphia, the compound is a specimen of the late nineteenth century social hygeine movement bound up in well-meaning upper/middle class paternalism. Though the social philosophy that gave rise to Soupy Island implied that poor immigrants were constitutionally unable to care for their own health, by all accounts Soupy Island was — and continues to be — a much needed outlet for the region’s kids.

[SOUPY ISLAND SIGN IN THOROFARE, NJ]
With the support of Philadelphia type-founder John F. Smith, the Sanitarium Association of Philadelphia began ferrying Philadelphia kids to spend an afternoon on the now-defunct Windmill Island in the Delaware in 1877, the efforts of the organization garnered the accolades of public health experts. By 1886, the Sanitarium Association purchased 15 acres on the then-bucolic eastern shore of the Delaware river in West Deptford, New Jersey. As William Hale Beckford put it in his The Children’s Crusade of 1916, the free service was “a pioneer charity of the country”:

The same year that the Sanitorium Association began its retreats across the Delaware, the Reverend Willard Parsons of Sherman, Pennsylvania opened the homes of his congregation to New York tenement children, now known as the Fresh Air Fund. To nineteenth century Americans, lung diseases were a paralyzing threat. Prior to Dr. Robert Koch’s identification that tuberculosis spread by the bacillus Mycobacterium tuberculosis, which so happened to thrive in dark apartments with several families, the curious causal scientific wisdom of the day suggested that the disease was innate to poor, immigrant populations in urban areas. But public health reformers did not see that tenement conditions were just sufficient and not necessary for the propagation of the disease. American health leaders of the late 19th century (many of whom were also religious leaders) attributed the spread of disease to a combination of moral corruptness and ignorance which kept immigrants in conditions of squalor. It was not entertained that conditions of poverty tended to determine whether immigrants lived in habitations where the photophobic bug thrived. For health reformers interested in offering “uplift” or instruction in social hygeine, some were motivated by altruism while others feared that sickness, absenteeism, and social disorder posed a grave threat to American industrialized society. 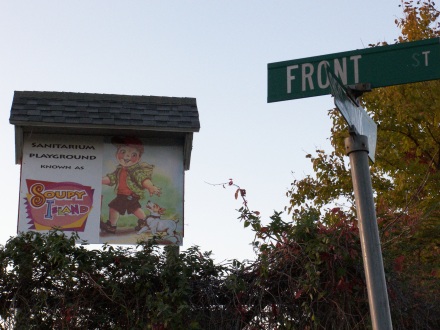 So from the discovery of the bacillus in 1882 to the discovery of streptomycin in 1946, the main mode of treatment was the sanitarium approach: a combination of “taking the air” and labor. But unlike the typical adult sanitarium, the youth sanitarium on the Delaware was designed to be carefree and fun. A carousel designed by Frederick Heinz was installed in 1901 and six years later a slide was added. Today, two pools and a wading pool help kids from Philly and Camden cool off during the summer. Soup seems to have always been a constant, and during the Depression it seems that strictness slackened and consumption was not a precondition for getting a cup of soup. Ferries would leave daily from Penn Treaty Park for the six mile trip down the Delaware.

In 2004, Soupy Island went through 70 cases of soup a season and survives on an endowment. Though it is unclear whether nearby Campbell’s Soup has had any affiliation with the facility, a team from the Camden company came out last May to fix up a couple ballfields. The caretaker of the facility lives in a 12-room dormitory that once housed the doctors and the nurses who for years treated Philadelphia’s consumptive children.

76 thoughts on ““A pioneer charity of the country”: NJ’s “Soupy Island” Sanitarium”