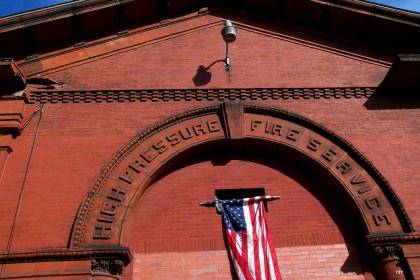 On March 17, 1900 Philadelphia’s center city business elites balked at the news that two New York fire insurance companies, the Home Insurance Company of New York and the Williamsburg City Insurance Company were instructing their underwriters to stop issuing fire insurance policies to Philadelphia businesses situated in an ominously named “conflagration district”: the area from Broad to the Delaware, Arch to Chestnut Sts. It was usual for late nineteenth century fire insurance companies trying to limit unnecessary exposure and most firms acted collaboratively and shared information about known risk while setting rigid rates which were seldom undersold. Thus, the Home Insurance and Williamsburg City Insurance companies were emboldened by the Weed and Kennedy Company’s attempt to discontinue policies in the “conflagration district.” But its Philadelphia agents mutinied, refused to cut off its clients, and severed ties to the New York office.

For most responsible underwriters, Philadelphia’s firefighting infrastructure was dangerously underdeveloped, making the city susceptible to the kind of cataclysm that bankrupted some 68 of 200 firms insuring property after the great Chicago fire of 1871. Some fire insurance company officers with more vivid imaginations prophesized utter destruction. “If a fire ever gets well started in that risk, when a northwest gale is blowing,” warned Elijah R. Kennedy of the Weed and Kennedy Company, “it will burn for a mile until there is nothing more in its path to destroy.”

The city’s problem was not its Fire Department, which Kennedy acceded was “excellent”; nor was the city’s congestion to blame. It was the lack of water to fight fires that worried insurance companies. They maligned the city’s lack of interest in the proposal by local underwriter Henry W. Brown to establish a pumping station on the river which would supply water to the chief business district via a separate main for firefighting purposes. But the New York insurance officers chafed at the two to three years time to design and build such a system.

But Philadelphia did act fast, and one month after the New York Times reported the insurance companies’ discontinuance of service, F.L. Hand, the Chief of the Water Bureau (predecessor to the Philadelphia Water Department) sent design specifications for a “water-supply for extinguishing fires in the congested district of the city” to his superior, William C. Haddock, the head of the Department of Public Works. Initially rejecting plans to convey water from the Roxborough basin, Hand designed a more nuanced version of Brown’s scheme for a “High Pressure Fire Service.” His plan involved constructing pumping stations to supply various districts by a distribution network separate from the regular low pressure water and sewer lines. Hand recommended two stations be built on the city’s principal rivers, which at any given time could deliver no less than 225 pounds per square inch to special hydrants accessible only to the Fire Department. He also strenuously recommended that the mains be constructed of rolled steel pipe rather than the traditional cast iron. “The breaking of a 12-inch pipe in Market, Chesnut, or Walnut St.” he wrote in his recommendations, “under a pressure of 520 feet head, would, before the flow of water could be stopped, cause almost as much damage as a large fire.” All tolled, Hand estimated that the design and construction of two riverside pump houses along with their distribution mains would cost the city $702,539 and $625,975—a fairly large expenditure.

Perhaps the most innovative feature of the station constructed at Delaware and Race Sts. between 1902-3 was its employment of natural gas engines instead of a fixed steam engine to operate the suction pumps. Sensing that the station would be activated infrequently and that maintaining constant steam pressure to run the pumps would prove costly, F.L. Hand recommended the purchase of natural gas engines—a larger up-front outlay—in exchange for lower long-term operating and labor costs. While natural gas powered engines were small and largely untested in this ad hoc role, the unveiling of a 300 horsepower natural gas-powered Westinghouse engine at the 1901 Pan-American Exposition at Buffalo immediately attracted the Water Bureau’s attention. Each of the nine Westinghouse gas engines could be brought up to full capacity in less than a minute from receiving the initial alarm and deliver 1400 gallons of Delaware river water per minute to any needed location.

The key to the entire system was the network of telephonic communication boxes dispersed throughout the “conflagration district” and eventually the Kensington mill district. When a call came in from a numbered box, the station force consisting of the engineer and an assistant could bring all units into operation in less than seven minutes and working pressure at the hydrant was available in a minute. Pressure needs were dictated over the phone by the fire chief and more units brought on line if needed. A special High Pressure Fire Service corps of the Fire Department operated the larger diameter hydrants, maintained connection with the pumping station and managed water pressure at the fire site.

In just a few years, the High Pressure Fire Service had proven itself such a forward-thinking and reliable piece of municipal infrastructure that other cities actively solicited information regarding its operation. In a letter to a Brooklyn official, the Superintendent of the Pumping Station, John W. Weaver reported that “the High Pressure Fire Service has fulfilled every condition imposed on it, and its absolute efficiency has been proved every time it has been put into service.” In its 62 alarms, it had “rendered perfect service.” Just the day before, Weaver reported, the system had been activated for 30 minutes when box 176 at 6th and Market Sts. was activated. “Along every line,” Weaver reported, “the entire operation was thoroughly successful.”

Perhaps most importantly for propertied Philadelphia, the New York underwriters were satisfied. The local board of fire underwriters—a very powerful rate-setting organization—heartily endorsed the system. As W.M. Fleming reported in 1910 in the Transactions of the American Society of Mechanical Engineers, the system built at public expense had effected a “material reduction in fire losses in the protected district, large decrease in fire insurance rates and a greater willingness on the part of property owners in the protected section to erect pretentious office buildings.” 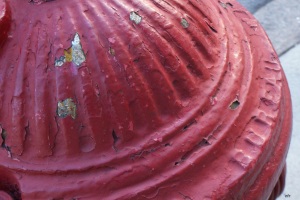 9 thoughts on ““It will burn for a mile”: Fire Insurance and the Origins of the High Pressure Fire Service”