Peregrine Arts began its much heralded Hidden City program last night, kicking open the doors of the long shuttered Royal Theater at 1524 South Street for the first audience the space has seen in nearly 39 years. Composer Todd Reynolds studied the people, places and history of the old 7th Ward to fashion his Sounds for the New Royality performed by the Network for New Music Ensemble. While the Network performed, film designer Bill Morrison projected onto a wall textured by decay the 1927 tale of class, race and love The Scar of Shame shot on location in the South Street corridor.

Ars Nova’s Jemeel Moondoc interpreted Anri Sala’s film The Long Sorrow with saxophone for the second half as eyes danced over the sodden beauty of the Royal, host once again to appreciative crowds.

It’s clear people are still thinking about the Reading Viaduct. Though a kind of vestigial organ of a vanished transportational body, the Viaduct is becoming to the neighborhoods it oversees. Artists are beginning to climb into its musty folds and call it their own and far from being a haunting piece of industrial detritus, the structure revels in transition and permanence.  A new public art installation set in a crevasse of the old trestle and a conceptual drawing tacked to the remains of the massive elevated structure facing Vine Street reflect this growing conversation. What first struck me was the delightfully perfect placement of the rendering against the faux-stolid stonework of the 1951 abutment.  But even more fascinating, upon closer inspection, is the future the rendering holds.

People pass it not knowing that it shows a place in time, in exactitude, as it could be. While the authors are still unknown, we’re fast on the case.  It could be the work of the Reading Viaduct Project folks, it could be the musing of a citizen, or it could be a student project.  Basically, it depicts what could be the very inviting southern trailhead of the Reading Viaduct–four flights of steps and an inclined walkway. In what appears a very honest and natural depiction a real possibility: a couple lounges on the broad Art Museum like steps, a family ambles by while a jogger ascends the series of inclined planes.

The good folks at the Asian Arts Initiative, who themselves have sponsored an amazing sculptural project using the viaduct as a backdrop, are looking into the mysterious rendering.  Just a block down from the futural sketch, Jonathan and Kimberly Stemler’s the little red string consists of a series of tiny Chinese lanterns strung along the ceiling of the Carlton Street portal of the viaduct.  Even in the white hot heat of last Sunday afternoon, the tiny Baby’s Bottom lanterns shone bright against the ochre-hued blackness of the dank tunnel.  If you follow the sinuous electrical cables you’ll find that the tiny bulbs are illuminated by power from the Shelly Electric Company, a seemingly longtime neighbor of the trestle.  If you pass through the tunnel to the west, a placard affixed to the Shelly Company’s wall orients you to the piece.  the little red string is one of four public art pieces sponsored by the Asian Arts Initiative as a part of their Futurescapes–Chinatown in Flux project, a sculptural telling of how Chinese-American Philadelphians grapple with and ultimately populate austere cityscapes emptied of their personal content. 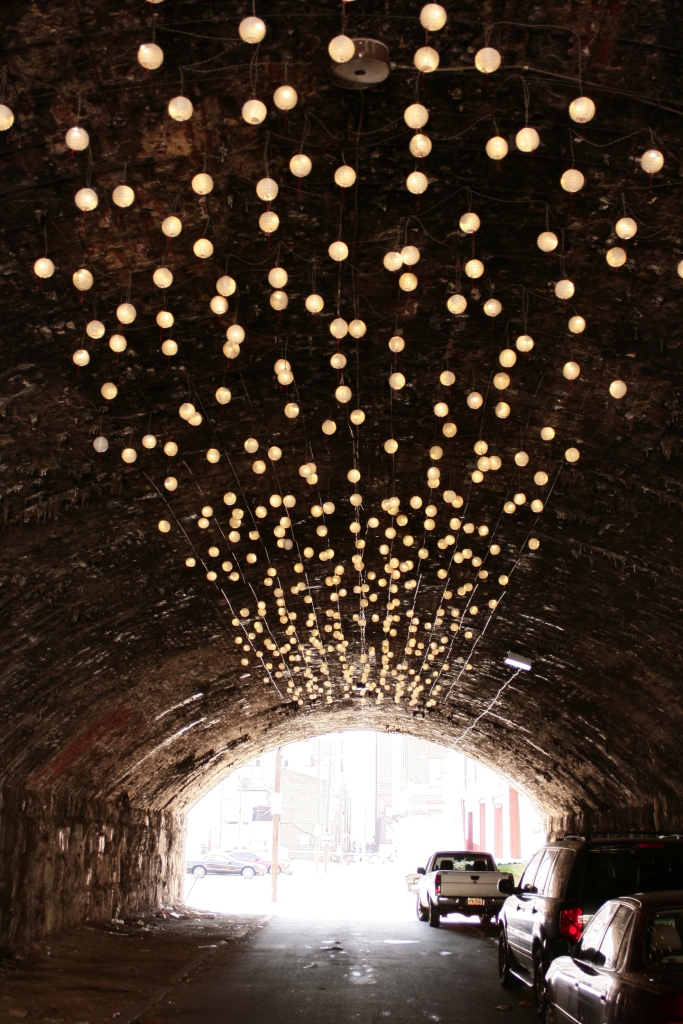 Projects like these amount to something of a response to my earlier suggestion that the Viaduct Project fundamentally lacked support on the ground. To be sure, the obstacles to developing the viaduct into Philadelphia’s High Line still exist. But both these projects show a desire to reconnect the Reading Viaduct to a living city, to reconnect it to the people it was meant to serve, albeit in a different form.

And if we believe things have an essential and constant nature: the thing that once ferried so many will again be remade and in turn, remake. 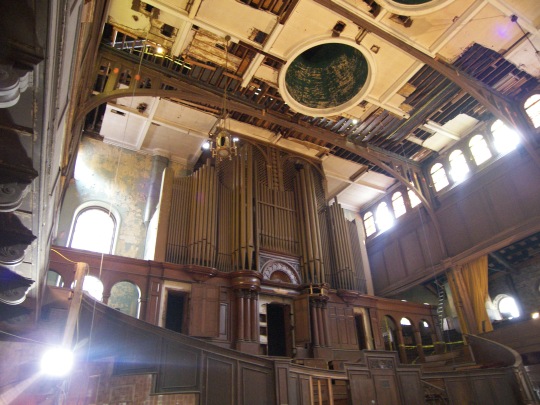 Although it is now touted as the “symbolic home” of Temple University, since the 1970s the Baptist Temple on the southwest corner of Berks and Broad had suffered from a quasi-official policy of salutary neglect. Some have gone so far as to sugest that it was the approach of former Temple University president Peter J. Liacouras (1981-2000) to look the other way as the historic cradle of the university mouldered into the ground. While this is unknown, Temple has come around to the idea of adapting (while not preserving) the internal space where charismatic Russell H. Conwell taught a handful of “night owls” seeking upward advancement.